Here are two works of art. 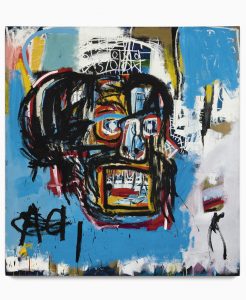 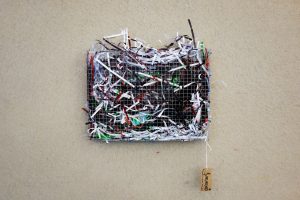 The Basquait sold at auction for $110,000,000 (bought by Yusaku Maezawa  who then took a selfie with the painting and posted it on instagram.)

But the Gallacher is valued currently, at only $100,000,000 (other valuations available) And I know what you’re thinking.

Why the difference in price? Why is the Basquait worth $10,000,000 more than the Gallacher.

Firstly let’s examine the similarities between the works.

The Basquait is essentially Graffiti. Semiotically it sends a message of rebellion and resistance, it’s a statement of identity and a refusal to conform. It is a warning shout against the prevailing hegemony, a call to resist oppression and to assert individual freedom.

And so, in it’s own way is the Gallacher. A refusal to conform, a rebellion against our Big Data society. The data has been shredded and caged – but there it is. Semiotically disarmed, but still evident and still existing. This work is a shout of warning against the hegemony too. This is a call to resist the pervasive culture of Data capture and a resistance blow against mistaking data for real-life.

So, I think you’ll agree that the works are, in many respects, similar. So how do we account for that $10,000,000 difference – well, the difference between the works is the artist.

Jean-Michel was a charismatic urban new-yorker, struggling against racism and poverty. He was addicted to heroin and died of an overdose at the glamorous age of 27.

So my advice to any up and coming artists here who want to make an impact in the commercial art world, in what  Brian O’Doherty called  ‘The expensive compound of gallery, collector, auction house, and museum’ . my advice to you is this…  Live fast, die young, and take drugs.